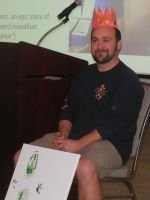 Please welcome John Klear as WAVE’s 2014 Volunteer of the Year.  Throughout his years volunteering at the aquarium, John has received “Volunteer of the Month” four times. The definition of dedication is “self-sacrificing devotion”, and that is what John shows each and every time he volunteers!  On one occasion, he gave up his lunch break at his 9-5 job to drive across town and help with an animal outreach (& then drove back to finish his day’s work!) Outreaches require two trained animal handlers to be there to transport an animal off grounds & we were running out of time to find a second handler for an extremely important event. John is known to drop everything he is doing to help anyone at the Aquarium, & sacrifices his time to ensure our guests have a great experience with our animals.
John and his wife Michelle recently relocated to North Carolina. We wish you both the best of luck and look forward to seeing you when you visit Cincinnati!

Thank you John for all you do!
We will miss you!

2014 Volunteers of the Month

“This duo really helped me out when I needed it! We all have those random projects that HAVE TO BE DONE, but TAKE FOREVER and would be much easier (and help save your sanity) with a couple extra sets of hands. Well, these two came to my rescue! Jenny asked them to come in on a day that they usually aren’t already volunteering, and they rose to the occasion and helped for almost three hours straight! (One of them even came in after spending the morning at the doctor!). Nancy and John Wayne were not only willing to help, but they were amazing company and really made a tough task much less painful. I cannot thank them enough for their help!”

Sam joined the Aquarium family 1 ½ years ago. Sam has been a Summer Naturalist, Day Captain and is also in TAP (Teen Apprenticeship). As a Day Captain, he was on the ball and asked if there was anything he could do to help the supervisor. There was a door alarm and several other things happening throughout the Aquarium all at the same time. Sam completed the Otter Feed and also did an animal encounter for the 3pm Backstage Animal Experience. Sam is amazing and did all of this without the supervisor asking the volunteer to do it. This all happened on a very busy day!

Tami West volunteer joined our Aquarium family in July 2012 and is being nominated, because she is one of the hardest working, most dependable volunteers Jen H. has ever trained and worked with.  Tami mainly volunteers with Scott but when she is done with his tasks she readily makes herself available to other husbandry staff to help out in any way.  She is smart and reliable.  Tami has been able to quickly learn many routine husbandry tasks and is up to any new challenges.  She has earned respect from all staff members with whom she has worked.  Her abilities and confidence has been a vital contributor to our team while we have been busy with the shark ray pups.  The words “we couldn’t do it without her” are more than appropriate to describe how many of us feel about her.

Please welcome John Klear as WAVE’s 2014 Volunteer of the Year and April Volunteer of the Month.  Throughout his years volunteering at the aquarium, John has received “Volunteer of the Month” fourtimes. The definition of dedication is “self-sacrificing devotion”, and that is what John shows each and every time he volunteers!  On one occasion, he gave up his lunch break at his 9-5 job to drive across town and help with an animal outreach (& then drove back to finish his day’s work!) Outreaches require two trained animal handlers to be there to transport an animal off grounds & we were running out of time to find a second handler for an extremely important event. John is known to drop everything he is doing to help anyone at the Aquarium, & sacrifices his time to ensure our guests have a great experience with our animals.

Toni joined our family over 6 years ago and has been nominated several times for Volunteer of the Month. She is always willing to help out in any way that she can.  She continuously goes above and beyond when helping with our Outreach program.  She is extremely knowledgeable about our animals in the program as well as the animals throughout the aquarium.  You can tell Toni enjoys what she is doing because the guests always respond so positively to her stories and interaction with them. She is a great candidate for the volunteer of the month because she encapsulates what any organization would need from a volunteer and more.

Larry is such a wonderful representative of the Aquarium, and is definitely a person that helps to “Create Memories Worth Repeating”! Larry joined the Aquarium family 10 years ago and this is his fourth time being Volunteer of the Monthy.  Larry was Volunteer fo the Year in 2007! Larry wears many hats these days as Volunteer. He is simply outstanding in all that he does! Larry makes our BTS tours fun, interesting and educational. He has given tourse for a number of years ane really knows what he is talking about. With the school groups, he is also education them about all the various departmentss of the Aquarium, and the different positions. It is obvious how much Larry enjoys educating our young future Aquarium staff. He presents every bit of information in a fun, entertaining yet knowledgeable way. He grabs the interest and attention of every student on his tours. The have fun, they learn and they now want to work here someday. Larry is one of the finest tour guides we have. you can see how  mesmerized the students are on his tours, and how very grateful the teachers are to have him educate their students about the Newport Aquarium. Larry represents the Newport Aquarium in the best manner possible, and is most deserving of being named Volunteer of the Month.

Last year, Joe Pedro was a summer naturalist who did such a great job that he asked to stay on as an Exhibit Interpreter for the fall and winter.  This year he applied to be a Day Captain and was unanimously given a thumbs up from the entire committee.  One week we didn’t have a day captain on the schedule and there were quite a few summer naturalist volunteering that day.  Dealing with a shift status form for our paid cast and adult volunteers is a lot of work for our 205’s having to juggle that shift status form PLUS the Summer naturalist shift status form and execute all the breaks, lunches, and needs of that many people would’ve have been crazy.  The 205 on duty noticed that Joe was signed in to come volunteer that morning as an Interpreter.  When asked by the 205 if he would mind taking on the task of being the Day Captain that day Joe graciously said yes and did a fantastic job.  He was initially only supposed to be there for a morning shift but he even stayed on and helped throughout the afternoon.  This provided a great aid to the 205 and went above and beyond what was asked of him just helping out for his morning shift.  Joe loves to volunteer at the aquarium and at times when you are busy being a Day Captain you are not getting to be in position and have fun with the guests so for him to give up his “Fun” day with the guests to help supervise showed a lot of dedication and maturity

Haley joined our Aquarium family in February 2014. One day when she was volunteering, we received a request from a guest who was blind and asked for a guide through the Aquarium. Haley jumped at the chance to help this guest.  The guest was very pleased to have Haley accompany them that day and sent the following thank you letter. “I would like to thank Ms. Bridges and the entire Aquarium staff for making my first experience at the Aquarium very memorable. Ms. Bridges was amazing at describing what she was visually taking in during my visit. Her knowledge of all the Aquarium exhibits coupled with her very personable character allowed for me to truly enjoy myself. Even though I am blind, I saw so much during my Aquarium experience. I have a much better appreciation for water and all of the various creatures, which call water home.” – Brian

Caleb Barber joined the Aquarium Family in June 2012. He was nominated for stepping up and basically running the 2014 Riversweep so it wasn’t cancelled due to a staff member being in a car accident the day before. Caleb made sure all the paperwork was handed out, items were collected from the aquarium, coordinated all the volunteers, made sure all of the food for breakfast and lunch was distributed and assisted with installing bricks in the WAVE Foundation Riverbank Learning Garden. Thank goodness it wasn’t cancelled, the Mayor of Newport even stopped by to say Thank you! Caleb made this annual event one of the most successful Riversweep events EVER!

Marc Kuhnhein joined our Aquarium Family as a volunteer diver in May 2012. Marc is an all-around excellent volunteer. From the day he started, he has been enthusiastic and dedicated, always helping out whenever and wherever he is needed most. He has been particularly helpful in training new divers, as he seems to have a natural affinity for it. He often responds to requests for help on very short notice, and has made several helpful suggestions regarding equipment. Most recently, he noticed a loose cabinet door in the food prep kitchen and promptly fixed it before it became a safety hazard. Marc is truly a valued asset of the Wave Foundation and the Newport Aquarium.

Jay has been a volunteer diver since June 2008.  While he has been a diver here, Jay has gone beyond what it means to be a great dive volunteer. He is always the first diver here and always brings a smile and a laugh to the DSO’s and fellow divers. Jay has done multiple things to help out while diving, from hydro cleaning the gravel in shark tank onto removing “bubble farts” from under the tunnel to even helping out with Scuba Santa. Jay not only meets his commitment of diving once a month, he comes in multiple times a month, and this is why we know no job is too small for Jay and the DSO’s can always count on him to get the job done. As Jay would say…GO BROWNS!

Barb Dock joined our family in 2004 and is like the “Eveready Bunny”; she just keeps going & going & giving & giving. She has donated over 4200 hous and is one of those very special volunteers that has been devoted to the Aquarium and WAVE since the beginning. Over the years, she has given of herself in so many ways: working in the Volunteer Office, special events such as Nauti Nite and Putt for Penguins, helping with WAVE on Wheels Outreach Programs and jumping in to help last minute with Guppy Adventures. But yet even today, her devotion and energy doesn’t slow down. She comes in and works on holiday and special events. Barb is always ready to jump in and assist wherever she is needed. Barb is a very special asset, her undending love and devotion never tires and never ends. She is a great example of those Core Values of “Being There” and “Make their Day”. Barb is most deserving of being named Volunteer of the Month. 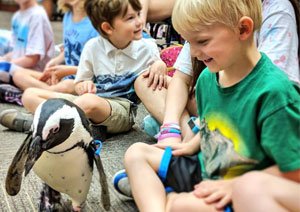